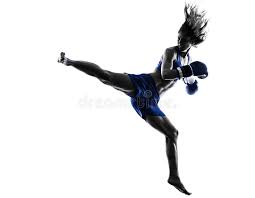 Kickboxing is a group of martial arts and stand-up combat sports based on kicking and punching, historically developed from karate, Muay Thai and Western boxing. Kickboxing is practiced for self-defense, general fitness, or as a contact sport. Training takes place on kickboxing mats predominantly.

kickboxing can be considered a hybrid martial art formed from the combination of elements of various traditional styles. This approach became increasingly popular since the 1970s, and since the 1990s, kickboxing has contributed to the emergence of mixed martial arts via further hybridisation with ground fighting techniques from Jujutsu and wrestling.

A lot of training would take place in a ring which helps the fighter acclimatise to the fighting environment. That said most kickboxing gyms are fitted out with kickboxing mats. Whilst kickboxers might call them kickboxing mats they are universally also known as puzzle mats. That is because they lock into each other like a jigsaw puzzle. That said kickboxing mats are an important addition to any gym.

Origins of The Term Kickboxing

The term kickboxing (キックボクシング) itself was introduced in the 1960s as a Japanese anglicism by Japanese boxing promoter Osamu Noguchi. It was a hybrid martial art combining Muay Thai and karate which he had introduced in 1958. The term was later also adopted by the American variant. Since there has been a lot of cross-fertilization between these styles, with many practitioners training or competing under the rules of more than one style, the history of the individual styles cannot be seen in isolation from one another.

The French term Boxe pieds-poings (literally “feet-fists-boxing”) is also used in the sense of “kickboxing” in the general meaning, including French boxing (savate) as well as American and Japanese kickboxing, Burmese and Thai boxing, any style of full contact karate, etc.

Since kickboxing is a broad term that can be used both in a wide and narrow sense, this can make understanding the history somewhat difficult. Some of the earliest forms of kickboxing included the various Indochinese martial arts especially muay boran, which developed into modern muay thai.

However in terms of modern competition, it was during the 1950s that a Japanese karateka named Tatsuo Yamada first established an outline of a new sport that combined karate and muay thai.

This was further explored during the early 1960s, when competitions between karate and muay thai began, which allowed for rule modifications to take place. By the middle of the decade the first true kickboxing events were being held in Osaka.

By the 1970s and 1980s the sport had expanded beyond Japan and had reached North America and Europe. It was during this time that many of the most prominentgoverning bodies were formed.

In Japan the sport was widely popular and was regularly broadcast on television before going into a dark period during the 1980s.
In North America the sport had unclear rules so kickboxing and full contact karate were essentially the same sport.
In Europe the sport found marginal success but did not thrive until the 1990s.

Since the 1990s the sport has been mostly dominated by the Japanese K-1 promotion, with some competition coming from other promotions and mostly pre-existing governing bodies.

On December 20, 1959, a Muay Thai among Thai fighters was held at Tokyo Asakusa town hall in Japan. Tatsuo Yamada, who established “Nihon Kempo Karate-do”, was interested in Muay Thai because he wanted to perform karate matches with full-contact rules since practitioners are not allowed to hit each other directly in karate matches.

At this time, it was unimaginable to hit each other in karate matches in Japan. He had already announced his plan which was named “The draft principles of project of establishment of a new sport and its industrialization” in November, 1959, and he proposed the tentative name of “karate-boxing” for this new sport. It is still unknown whether Thai fighters were invited by Yamada, but it is clear that Yamada was the only karateka who was really interested in Muay Thai.

There were “Karate vs. Muay Thai fights” February 12, 1963. The three karate fighters from Oyama dojo (kyokushin later) went to the Lumpinee Boxing Stadium in Thailand, and fought against three Muay Thai fighters. Japan won by 2–1: Tadashi Nakamura and Akio Fujihira both KOed opponents by punch while Kenji Kurosaki was KOed by elbow.

The main techniques of kickboxing is still derived from Japanese full contact karate (kyokushinkai). However, throwing and butting were allowed in the beginning to distinguish it from Muay Thai style. This was later repealed. The Kickboxing Association, the first kickboxing sanctioning body, was founded by Osamu Noguchi in 1966 soon after that. Then the first kickboxing event was held in Osaka on April 11, 1966.

Count Dante, Ray Scarica and Maung Gyi held the United States’ earliest cross-style full-contact style martial arts tournaments as early as 1962. Between 1970 and 1973 a handful of kickboxing promotions were staged across the USA. In the early days the rules were never clear, one of the first tournaments had no weight divisions and all the competitors fought off until one was left. During this early time, kickboxing and full contact karate are essentially the same sport.

The institutional separation of American full contact karate from kickboxing occurs with the formation of the Professional Karate Association (PKA) in 1974 and of the World Kickboxing Association (WKA) in 1976. The impact of the WKA on world martial arts as a whole was revolutionary. They were the first organised body of martial arts on a global scale to sanction fights, create ranking systems, and institute a development programme.

In the eighties, many fighters defected to the rival World Karate Association (WKA) because of the PKA’s policy of signing fighters to exclusive contracts; plus, the PKA sanctioned fights exclusively with what has become known as “full contact rules” which permit kicks only above the waist as opposed to the international rules advocated by the WKA which is similar to kickboxing promotions in Japan and other countries in Asia and Europe.

The International Kickboxing Federation (IKF) was founded in 1992. It is the most active kickboxing sanctioning body in North America and one of the top 3 worldwide organizations. The IKF also hosts the Largest All Amateur – Full Contact & Muay Thai – Kickboxing Tournament in the World, the IKF World Classic.

Dutch athletes have been very successful in the K-1 competitions. Out of the 18 K-1 World Grand Prix championship titles issued from 1993 to 2010, 15 went to Dutch participants (Peter Aerts, Ernesto Hoost, Remy Bonjasky, Semmy Schilt and Alistair Overeem). The remaining three titles were won by Branko Cikatić of Croatia in 1993,Andy Hug of Switzerland in 1996, and Mark Hunt of New Zealand in 2001.

Full contact rules, or American kickboxing, is essentially a mixture of Western boxing and traditional karate. The male kickboxers are bare-chested wearing kickboxing trousers and protective gear including: mouth-guard, hand-wraps, 10 oz (280 g). boxing gloves, groin-guard, shin-pads, kick-boots and protective helmet (for amateurs and those under 16). The female kickboxers will wear a sports bra and chest protection in addition to the male clothing/protective gear.

International rules, or freestyle rules (also know as Kickboxing in Europe, American Boxing in France and Low Kick in WAKO) , contrasts with full contact rules in that it allows also low kicks. The male kickboxers are bare-chested wearing kickboxing trousers or shorts and protective gear including: mouth-guard, hand-wraps, shin-wraps, 10 oz (280 g). boxing gloves and groin-guard. The female kickboxers will wear a sports bra and chest protection in addition to the male clothing/protective gear.

Muay Thai is unique in that it is the only style of kickboxing that allows elbows, knees, clinch fighting,throws, sweeps and low kicks. Groin strikes were allowed until the 1980s in international Muay Thai and are still permitted in Thailand itself (though the boxers wear cups to lessen the impact). Kicking to mid-body and head are scored highly generating a large number of points on judges’ scorecards. Moreover, kicking is still judged highly even if the kick was blocked. In contrast, punching is worth fewer points.

Oriental rules, also known as Japanese kickboxing and K-1 rules, is a combat sport created by the Japanese boxing promoter Osamu Noguchi and Karate practitioner Tatsuo Yamada. It was the first combat sport that adopted the name of “kickboxing” in 1966, later termed “Japanese kickboxing” as a retronym. Oriental rules bouts were traditionally fought over 5, 3 minute rounds but 3 round bouts have since become popular since their inception in the K-1 promotion.

The male kickboxers are bare-chested wearing shorts (although trousers and karate gis have been worn) and protective gear including: mouth-guard, hand-wraps, shin-wraps, 10 oz (280 g). boxing gloves and groin-guard. The female kickboxers will wear a sports bra and chest protection in addition to the male clothing/protective gear.

Sanshou, or Sanda, is a form of kickboxing originally developed by the Chinese military based upon the study and practices of traditional Kung fu and modern combat fighting techniques; it combines traditional kickboxing, which include close range and rapid successive punches and kicks, with wrestling, takedowns, throws, sweeps, kick catches, and in some competitions, even elbow and knee strikes.

The male fighters are bare-chested wearing shorts and protective gear including: mouth-guard, hand-wraps, 10 oz (280 g). boxing gloves and groin-guard. The female kickboxers will wear a sports bra and chest protection in addition to the male clothing/protective gear.

Shoot boxing is a unique style of kickboxing popular in Japan that utilizes standing submissions such as chokeholds, armlocks and wristlocks in addition to kicks, punches,knees and throws. The male fighters are bare-chested wearing skin tight trousers and protective gear including: mouth-guard, hand-wraps, 10 oz (280 g). boxing gloves and groin-guard. The female kickboxers will wear a sports bra and chest protection in addition to the male clothing/protective gear.

What ever the style one thing is for certain. All of these different styles of kickboxing use kickboxing mats during training. 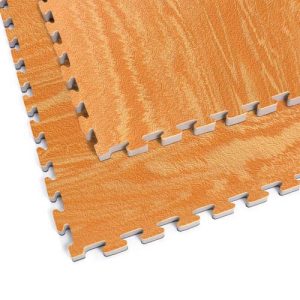