Grappling is the act of gripping or seizing the opponent, as can be clearly seen in wrestling, which is the best example of grappling. In grappling the two fighters grab at each other trying to get a grip so that they can get themselves into a position to throw the other person on the ground.

Once on the ground the fighter in the best position will try to apply some kind of submission or choke hold to get the other person to give up. The other person will give up by tapping out or indicating that they have had enough verbally or some other sort of means. Grappling can cover techniques used in many disciplines, styles and martial arts.

Jiu-jitsu is a martial art which has it origins in Japan in the 16th century and before. Jiu-jitsu was an amalgamation of fighting styles at the time which incorporated punching, kicking, take downs and submissions. Later on the art mainly concentrated on the take down and submission aspect as it was deemed a less violent method of subduing an opponent.

These days the most common form of jiu-jitsu is BJJ. BJJ is an abbreviation of Brazilian Jiu Jitsu which is a more grappling orientation form and is widely used in competition and mixed martial arts.

The kinds of mats one would use for these purposes depended mainly on taste.

Which of the above is chosen depends on if it is a professional organisation, the budget, and availability to name a few. 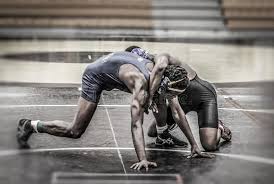